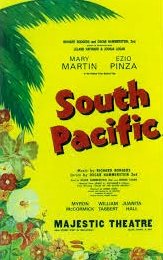 South Pacific, the 4th musical play of Rodgers and Hammerstein, was premiered in 1949 on Broadway and was an immediate hit, running for 1,925 performances. The plot is based on James Michener’s Pulitzer Prize-winning 1947 book, Tales of the South Pacific, combines elements of several of those stories. Rodgers and Hammerstein believed they could write a musical based on Michener’s work that would be financially successful and, at the same time, send a strong progressive message on racism.