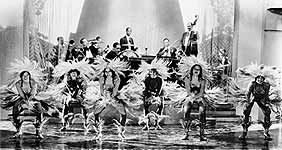 Sweet and Low-Down at the Cotton Club

The Great War was over, times were upbeat and a sense of prosperity, freedom and excitement was evident across the country. In New York City, the Harlem nightclubs were the happening places. From dusk to dawn their rooms were filled with boisterous patrons, the aroma of cigarette smoke and alcohol, and the sounds of a new music that tied it all together: jazz. One ballroom, the Cotton Club, on the second story of a building at 142nd Street and Lenox Avenue, was the crème de la crème of Manhattan’s nightspots. It was the favorite of the elite, the “Aristocrat of Harlem,” and its patrons included celebrities like George Gershwin, the Duke and Duchess of Windsor, Paul Whiteman and Marlene Dietrich. Harold Arlen and Dorothy Fields wrote and produced the stage shows, Duke Ellington and Cab Calloway conducted their snappy jazz bands, and the great black entertainers like Ethel Waters, Bill “Bojangles” Robinson, Lena Horne and Josephine Baker played the room to the delight of the all-white audience. Live piano music from the era will be performed coupled with archival music and newsreel footage of Harlem during its glory days.