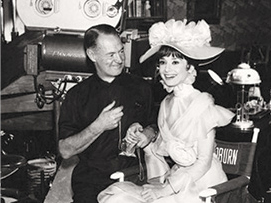 The Hollywood Musical Part 4: From West Side Story Hello, Dolly!

Films created during the 1960s belong to the most creative era in cinema history, one in which Hollywood responded to a time of tremendous changes reflected in shifting social and cultural values, the Vietnam War, new forms of rock and pop music, and the acceleration of technological ingenuity. The dominance of television led to a rapidly diminishing movie audience, with just 145 musicals produced in the decade, compared to the 453 all-singing, all-dancing extravaganzas churned out in the 1930s.

Though the musical would continue to decline as the decade unfolded, three films of the 1960s were among the screen’s greatest spectacles and successes: West Side Story, The Sound of Music, and My Fair Lady. Other straightforward adaptions of Broadway hits like Gypsy, Can-Can, Oliver!, Camelot, Funny Girl, and Bye Bye Birdie suggested that the beloved musical movie was in good health. Mary Poppins, Thoroughly Modern Millie, Doctor Dolittle, and Chitty Chitty Bang Bang, original film musicals, ended the decade with a flourish of creativity.

Enjoy an evening of memorable film clips, musical recordings, and historical anecdotes with American music specialist Robert Wyatt. Be entertained by the emergence of Barbara Streisand, witness Julie Andrews’ transformation from a nanny to a nun, and revisit a decade in which the movie musical tradition reached heights in terms of story, song, star power, and box-office success that it would never again achieve.